[Archived text from Brainlink: A project of the Center for Mental Health and Media, supported by a grant from the National Institute on Drug Abuse. By Cheryl K. Olson, Sc.D.]

When you think about your brain, you probably picture a gray, soggy glob of tissue inside your skull. It’s not much to look at, and gives no hints to what’s going on in there.

Compare that to the colorful neuroimaging pictures from fMRI (functional magnetic resonance imaging) or PET (positron emission tomography) scans. Now we see a red patch that shows where brain cells are supposedly firing rapidly…or a blue splotch that seems to show the craving of a recovering cocaine addict.

Neuroimaging pictures, like fMRI and PET scans,  are very impressive and deceptively simple. Even nonscientists who couldn’t make sense of a microscope slide, instantly see the difference between two brain images in which the amygdala in one is glowing bright red, while the other isn’t.

But do those pictures give you valuable information? The answer, say neuroscientists, is a resounding yes…and no.

The curse of neuroimaging is that it can make the mysterious workings of the brain feel more real, and look clear-cut. And that leads some journalists, and even some researchers, to leap to conclusions.

We know, for example, that feeling anxious will cause the amygdala, an almond-shaped structure deep within the brain, to light up on an fMRI, showing that it’s very active. But the logic doesn’t work the other way around. If the amygdala is glowing red on the image, it doesn’t mean that the person is anxious. You get the same result on the fMRI from a strong smell, from seeing something that’s sexually arousing, and from lots of other things.

And that’s why many neuroscientists are growing concerned by some of the interpretations of these and other images. The power of the picture is outweighing the logic of the research.

New research support these concerns. In one recent study, college students were asked to evaluate several articles describing fake brain imaging studies. For example, one bogus article was called, “Watching TV is Related to Math Ability.” The article claimed that adding numbers and watching television both activate the same part of the brain. Therefore, time spent with TV must boost math skills! 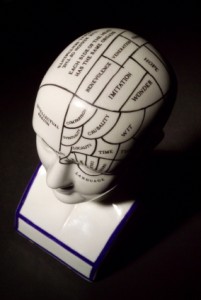 Some of the fake articles had bar charts; others included a colorful fMRI image. When the brain image was added, students were more likely to agree that the scientific reasoning in the article made sense—even when the picture has nothing to do with the content of the study. Another group of students was asked to rate a real scientific paper. Some versions included a brain image; others showed a colorful graphic with numbers. Again, the brain image ruled.

Some have compared the misuse of fMRI to the 19th-century craze for phrenology, a “science” that claimed to predict a person’s character from patterns of bumps on the skull. Both are based on the idea that different parts of the brain are responsible for feelings, personality and abilities – from the memory of words and ability to plan, to urges to fight or murder.

When MRI was introduced in the 1980s, it was the biggest advance in imaging technology since X-rays. With X-rays, doctors can see damage to bones. With magnetic resonance imaging, they can see pictures of soft tissues. These images, created using magnetic fields and radio waves, allowed doctors diagnose illnesses without having to cut into the body. Around the world, millions of diagnostic MRI procedures are now done every year.

Functional MRI, introduced in the 1990s, added the element of action. Researchers could now record tiny, minute-by-minute changes in brain metabolism. They could see how patterns of blood flow in the brain varied with different types of brain activity. These images are possible because the magnetic properties of blood varies based on the amount of oxygen in it. Active parts of the brain get more oxygen-rich blood.

Can fMRI read your mind?

No. FMRI only gives indirect information about what’s happening in the brain. You can’t look at a brain image and tell if someone is in love, for example. Deciding what a fRMI picture means also depends on the task: What the person inside the machine was asked to look at, think about, or do. There are only so many things you can do while lying inside a big, expensive MRI machine!

The task also needs to be a good match for the research hypothesis: what the scientists want to find out. Is showing someone photos of two politicians and asking which one looks more trustworthy a good way to predict voting behavior? It’s tempting to over-interpret the fMRI pictures and conclude, “because this brain area is more active, this person is more likely to vote for that candidate.”

FMRI may be limited in reading our thoughts or feelings. But it’s an incredibly useful tool for medical research. Here are just a few examples of fMRI studies: